The Ohio Art Leagues next exhibition, In A Sense / Innocence, was mention in the Columbus Dispatch.

Photo: Having a ball

“Daric Gill, an artist with the Ohio Art League, with encouragement from Samantha Bond yesterday, works on constructing a giant ball using flexible tubing and PVC pipe connectors at the art studio of the Franklin County Board of Developmental Disabilities. The project is part of a multisensory-experience art exhibition that will be on display next month at the Ohio Art League Columbus Gallery, 1552 N. High St.”

In a Sense, a community engaged collaboration will be exhibited next month.  OAL is partnering with Franklin County Board of Developmental Disabilities, (Early Childhood Development Partnership), to create a multi-sensory experience in the gallery. Together, the children and four of our artists will work on pieces that are created around one of the ways children explore the world with their senses. These collaborative works, as well as the artist’s own work, will be exhibited at together in the South Campus Gateway space during April 2013.

The experience in the words of artist,  Daric Gill (Sponsored by the Columbus Idea Foundry) 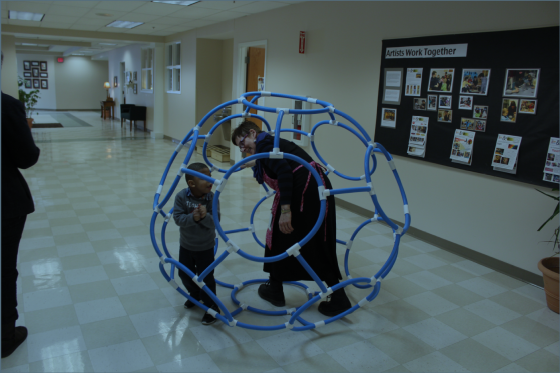 Matthew is four years old. He loves to move and is very curious. He learns best by touching and exploring. He has some developmental issues that make sitting still, learning by listening, and moving safely through the school challenging. His teachers and therapists are always looking for ways to engage him and help him focus. Imagine everyoneʼs joy when he discovered a huge, open sphere in the hallway. His studio teacher was even inside it! After observing for a moment, he knew he wanted to get inside too. Once inside, his drive to move and curiosity were blended into a wonderful time of discovery. He cautiously reached and stepped over the plastic tubes that formed the sphere, rolling it down the hall. He spontaneously used motor patterns that his physical therapist has been working on – showing an awareness of physical obstacles and stepping over items in his path. He was learning about how things work together as he touched and tugged at the fasteners holding the tubes together. His face glowed with a combination of concentration and discovery. No one was telling him what to do, he was motivated to learn! The sphere had its beginnings as a model for other young children exploring the process of building. What started as a creative process for a group, became a wonderful opportunity for one little boy to practice new skills in an intriguing way.

As adults, we often forget how important the act of play is to creating a self that feels complete. Adults almost need special permission to play. Far too often, the thought is that ‘life’ is the day-to-day grind that prevents us from playing.

Over the past few months I’ve had the extreme privilege to be reminded that life is the engagement of play, not the force that prevents us from it. The outstanding faculty and children at the FCBDD are steeped in play in a way that showcases its very nature as crucial to the act of learning. One could only hope to retain through adulthood, the purity of investigation and exploration I’ve seen in these children.

Through the collaboration with my perfectly paired instructor, Darren Thompson, we were able to envision and implement an artistic system of play that combined the malleability of exploration with directional encouragement. The children were given boxes of ribbed flexible tubing and T-connectors that could be fit over the tubing. To most adults, it simply looked like a collection of plumbing parts that could be found at any local hardware store. However, in the mind’s eye of a child these pieces were the brightly colored components that made hair trimmers, laser blasters, hammers, horns, houses, bike frames, wings to fly with, and a myriad of other exciting possibilities.

Soon after, the children realized that their connections could be combined with that of another’s. With a little help, they made ladder rungs that were then curled into wheels to roll and catch. The creation of two geodesic globes, one of which can fit an adult inside, supplied an even greater stimulus for exploration and engaged new sets of dexterous coordination. In one case, a child has met most all of his physical therapy goals simply by walking into, playing with, and emerging from the globes.

We’ve only begun what is to be an extensive friendship between the OAL, the arts community in general, and the FCBDD. I had originally gone into this experience hoping to benefit the children in some way. And while we’ve not completed our journey, I’m already pleasantly finding that all of us are benefiting from the partnership in ways only children can teach.

The Reggio Emilia Approach–role of the artist, the studio as a place of learning