Fellow member Judy Takacs will be featured in Hungarian Rhapsody, an exhibit that features works of five other artists. The exhibition will be curated by George Kozmon. These pieces of art are in ode to the Hungarian-American culture. All of the artists that are being showcased are Cleveland locals that share the Hungarian backdrop (i.e. they are Hungarian).

The opening reception for Hungarian Rhapsody will Sunday March 3rd, from 2pm to 5pm. In addition to the exhibition, there will be a performance by the REGöS dance group.

It will be held at Beechwood Community Center, 25255 Fairmount Blvd in Beachwood, Ohio.

The show will continue through March 24th.

By going to this her website, here , you can view Judy’s progression through her on going project, The Solon Senior Project.

On her website she explains more about the project,

“Each Thursday from January through May 2012,  I painted senior citizens at the Solon Senior Center, in my home town. These beautiful and interesting souls model for me as their friends come and go…or sit and stay, as long as they please. It is a lively demonstration of my painting skills, and an opportunity for me to plant myself in a space where new and fascinating people with stories and wisdom are always coming my way.”

Then, on March 6th, the artist will hold a talk at the Cleveland Institute of Art at 7:00pm. It will be in McCullough Building, room 305. The building is located at 11610 Euclid Ave., Cleveland, Ohio.

Be sure to check out her blog as well, Chicks With Balls.

Join OAL to sing out your woes or serenade your loved ones.

Time: 7:00 – 9:00 pm
Host: OAL (Lexie Stoia/Esther Hall)
Bring any questions you have for upcoming call for entries.
No reservation necessary: just SHOW UP

The first presentation held by the Billy Ireland Cartoon Library & Museum was given today at the Ohio Art League space on Saturday, February 9th, 2013, informing comic fanatics about the extreme connection that resides within Ohio and the start-up of comics. Caitlin McGurk, the engagement coordinator, gave the in-depth background of the local comic celebrities arraying from the start-up of comics, the first woman who became a full-time editorial cartoonist in the nation, Edwina Dumm, and the Cleveland relation to Winston McCay’s fame.

The Billy Ireland Cartoon Library & Museum is a museum dedicated to the Columbus Dispatches first cartoon artist. He created cartoon articles when these graphics covered whole pages versus the 8inch strips we see in the newspapers today. The cartoon library holds over 450,000 original cartoons, 50,000 books, and 2.5 million comic strip clippings and newspaper pages. 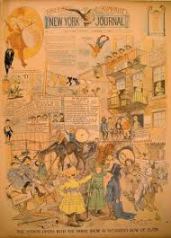 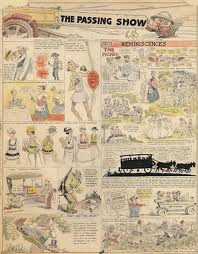 1.The inventor of the moder comic, Richard F. Outcault, who created The Yellow Kid and Buster Brown, was born in Lanacaster, Ohio. At age 15, he went to McMicken University’s School of Design, located in Cincinnati.

2.Edwina Dumm was a Ohio native, born in Upper Sandusky. Following graduation from high school, she took a course that focused on the illustration of cartoons in Cleveland. After that, she began illustrating editorial cartoons for the Columbus Daily Motion in August of 1915

3. Superman came to life in a zine that was created by Jerry Siegel and Joe Shuster after the two met while attending Cleveland’s Glenville High School.

4. John Steinbeck wrote a letter to Milton Caniff professing his love for Dragon Lady from Terry and the Pirates. Milton Caniff was born in Hillsboro, Ohio.

5. Billy Ireland, a self-taught cartoonist, contributed his artwork to the Columbus Dispatch for a majority of his life. He is well-known for The Passing Show, a cartoon commentary surrounding local politics and entertainment

Thanks to all those that came and participated and be sure to check out the Cartoon Library’s new space that will be opening up next fall!

Also be sure to come to our discussion: Diversity Among Columbus Comics Creators Panel! Feb. 16th at 4pm at the OAL Gallery. More info here.